A Christmas Carol – The Radio Play

We will resume our performance schedule when we are allowed to do so by Public Health Orders.

Metro Theatre  is thrilled to present A Christmas Carol – The Radio Play as our Holiday show for this season. After 35 years of continuous performances, our Annual Traditional Christmas Pantomime has been cancelled due to COVID-19.  In its stead , Metro Theatre is pleased to pivot by presenting –  A Christmas Carol – The Radio Play  an original work by writer Erik Gow (Based on the Charles Dickens novel).  The play is directed by Chris Adams and graces our stage December 10, 2020 through to January 3, 2021. Evening performances are at 7:30 pm with Matinees at 2 pm. 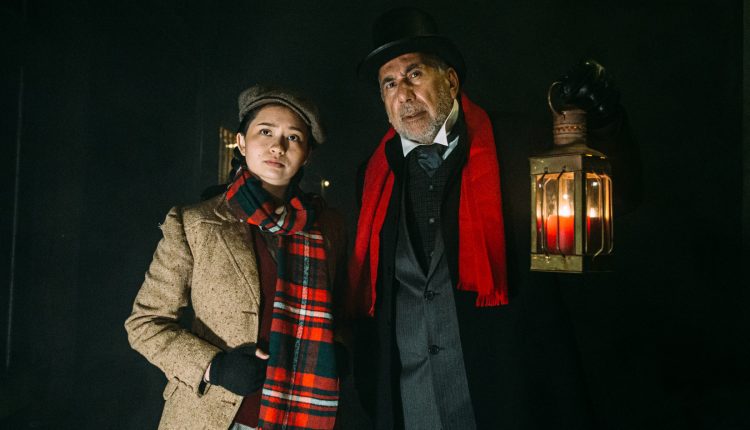 A Christmas Carol recounts the story of Ebenezer Scrooge, an elderly miser who is visited by the ghost of his former business partner and the spirits of Christmas Past, Present and Yet to Come.   When you walk into the Metro Theatre this December you’ll be drawn into this well loved story with dramatized, acoustic performances.  The set is  designed as a live 1940s radio broadcast and the actors fully costumed with unique props.   Our Foley artists  augment the performance  with live sound effects and musical underscoring to engage your imagination as you are transported into the story  via Live Theatre.

Join Vancouver actor David Adams in the role of Ebenezer Scrooge as  he meets all the usual characters from Bob Cratchit to Jacob Marley,  with only six actors creating and voicing over 40 of the beloved characters for this charming take on a family favorite that will leave no one saying “Bah Humbug!”

“What will Christmas be like without a Metro Panto? Well, thanks to Covid-19 we are about to find out. This is the first time anything like this will be seen on the Metro Stage and this is the only Christmas Radio play in Vancouver this December. I’m excited and scared to direct such a show –  Panto’s I’ve directed and loved for many years – Radio Plays live on stage are a new beast and a new creation – But don’t worry, scary is good and often creates wonderfully creative art.” Director Chris Adams

Reserve your seats by calling the Box Office 604 266 7191 or Purchase Tickets  Walk Up Ticket Sales are allowed for all performances that are not sold out. 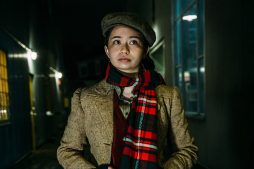 At the recommendation of  Tiny Tim, our charitable appeal this year is on behalf of  Backpack Buddies . Kids and their families are facing a lot of uncertainty this year. Backpack Buddies delivers much needed food to kids in Vancouver every Friday afternoon. At just $15, a bag of food contains 9 meals and extra snacks so that a child has enough to eat over the weekend plus a couple extra meals for the week ahead.  Should you be so inclined, join us  and  Support Backpack Buddies

A Christmas Carol – The Radio Play

MEET THE THE ‘CAROLERS’

David last appeared at The Metro Theatre in Pack of Lies, 84 Charing Cross Road and Caine Mutiny Court Martial in the mid-80s! He’s since had the good fortune to enjoy a varied career as actor, singer and director, across the country. Notable achievements include: National Tours of Phantom of the Opera, Show Boat & Sunset Boulevard, 5 seasons at The Shaw Festival and an appearance on The X-Files!

Roger is very fortunate to have spent his entire career in the performing arts. A Grammy award-winning recording engineer, he is best known for his big band and orchestral recordings.

He owns and operates Dick & Roger’s Sound Studio, a professional audio post-production recording studio in Vancouver. As a character actor, he has appeared on many stages around the lower mainland including The Royal Canadian Theatre Company, Side Kick Players, Vagabond Players, and Metro Theatre.

Jill Raymond is a multi-award-winning international creator and actor. She is also Founder/Artistic Director of Direct Theatre Collective. In the midst of the darkness of 2020, she hopes this show can bring you some light and hope, and toasts to you and your loved ones.

Chris is thrilled to finally be returning to the stage this Christmas season! Chris is a graduate of Capilano University’s Musical Theatre Program, and is ecstatic to bring life to this classic tale that we all know and love. Chris couldn’t be more grateful to be working with such an excellent cast and creative team.

Soon to be graduating from NYU Tisch School of the Arts with a BFA in Drama Emilia is a New York, LA, and Vancouver based actor originally from Vancouver. Prior to her time in New York, Emilia graduated from the American Academy of Dramatic Arts in Los Angeles, California where she also spent time studying at UCB and Groundlings. Emilia hopes this production will bring people joy and comfort in this most difficult time.

Courtney is an actor and educator based in the lower mainland. She is a dual graduate of Capilano University’s Musical Theatre Program and the UBC BFA, currently working as a Drama/Dance Teacher at David Thompson Secondary. Courtney has worked with a variety of local theatre companies, including: Mitch and Murray Productions, Awkward Stage Productions, Beach House Theatre, Neworld Theatre, Align Entertainment, RCMT, Gateway Theatre, and eight summers with TUTS. Thank you for supporting live theatre!

Chris is a two-time Ovation Award winning actor, two-time Jessie Award winning producer, and two-time Jessie Nominated director, who holds his BFA from UVIC. Directing credits include Company with Raincity Theatre, Sweeney Todd with Snapshots Collective, Seussical and The Addams Family with Kay Meek, Rock of Ages with Renegade, 13 with BOTCo, and, of course, last year’s panto; Alice In Wonderland

Erik Gow is a Vancouver based Jessie nominated Actor, Composer, Playwright, and Educator.

When not performing, Erik holds regular teaching positions with Bard on the Beach, The Shadbolt Arts Centre, Arts Club Theatre, Arts Umbrella, Gateway Theatre, and the University of British Columbia. He is also available for masterclasses and workshops in acting, voice, music, and physical theatre.

A freelance Scenic Artist, Tracy-Lynn has been the resident Scenic Painter/Set Decorator at Metro Theatre for over 10 years. In addition to working for theatre groups all over the lower mainland, she also works as a fine art painter and is back at school to become an Expressive Arts Therapist.

Joscelyne Tamburri is very excited to be back at the Metro this Christmas season, but this time as the costume designer and rehearsal ASM for their first-ever live radio play, Christmas Carol. You may recognize her from her performance as Tweedle Dummer in last year’s “Alice in Wonderland: The Pantomime” or from other shows around Vancouver, such as “Rock of Ages” (Renegade), “42nd Street”, “Mary Poppins” (TUTS), or as a main cast member at The Giggle Dam. She is very grateful to Chris Adams and Metro Theatre for giving her this opportunity to step offstage out of the stage lights, and into her role as the costume designer, and to Kat Palmer for being a wonderful SM as usual. Enjoy the show!

Originally from Ottawa, Kat is a graduate of the Canadian College of Performing Arts. Though usually onstage, she’s been found behind the scenes on 13! The Musical (BoTCo), Alice in Wonderland (Metro Theatre) and the Jessie Award-winning Sweeney Todd (Snapshots Collective). Kat is thankful to be back in the theatre, working (6 feet apart) with such a wonderful team.

Frances is delighted to be working on another Metro production, but wearing a brand new hat: that of sound effects! For the record, old dogs are perfectly capable of learning new tricks!!! Past Metro productions include A Bunch of Amateurs (Props), Persuasion (Assistant director), Blithe Spirit ( Madam Arcati), Emma (Miss Bates).

Book early for best pricing.  GST is included in all prices

Walk Up Tickets Sales are allowed at any performance that is not sold out.

Metro Theatre via the contact form at the bottom of this page for more information, publicity photos, or to arrange interviews.