In a small town in the American Rockies, Professor Henry Lowenthal is a popular professor at Mesa Verde. Together with his wife Polly, they are waiting for a visit from Edith Wilshire, the current head of the philosophy department. He is nervous, wondering what Edith wants to discuss and hoping that it’s because she’s finally agreeing with him against a new course on transcendental meditation. Polly holds out no hope, already having a low opinion of her husband’s former student. 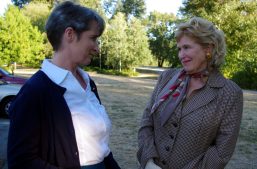 Edith arrives in her usual blustery way, announcing that she’s just stopped by on her way to her secluded cabin in the mountains and that she’s parked her precious MG in their garage so no one will steal it. Casually swinging around her phi beta kappa key and helping herself to coffee, Edith points out that with Henry turning sixty-five soon, he will be forced to retire. Henry and Polly both protest, reminding her that the Van Voorhees Chair of the Humanities will allow him to keep teaching, and that the position is being held open for him. Playing her trump card as his boss, Edith gleefully informs them that she will not be recommending Henry for the position, payback for a perceived slight from him that she’s been nursing since she was his student.

Henry and Edith get into a terrific argument, in which nothing he can say can soothe her. Edith continues to push the right buttons, whether it’s rationalizing Hitler or disrespecting Henry’s hero, Socrates, tossing his prized bust back at him when she turns to leave. Henry follows, and the fight escalates outside until things suddenly go silent. Edith staggers back in, holding the wound on her head where Henry hit her with the bronze bust. He apologizes, but she collapses to the floor, where Polly discovers that she’s dead.

Both ponder what to do next; Henry wants to call the police, but Polly wants to protect him. She explains to him that if he goes to jail, he’ll be disappointing his students and those that respect him, and that Edith will have won. He’s unsure, but she convinces him that the best way to handle things is to take Edith’s body up to the cabin in her car, and then to push her off a cliff to make it look like an accident. Then he can meet Polly down the road, and they can return to their quite academic life.

That is, until the doorbell rings. They hurriedly drag Edith’s body into the pantry, then open the door to find Melvin McMullen, one of Henry’s philosophy students. Declining Polly’s offer of coffee, Melvin explains that he’s come to negotiate his way out of a failing grade because, he says, that his father will kill him if he finds out. Henry refuses, preferring to stick to his principles and angering his flighty student in the process. Melvin threatens to go over his head, and if that doesn’t work, to kill himself and blame Henry in the note.

Three days later, after Edith’s funeral, Henry is feeling guilty and resentful that Polly has talked him out of doing the right thing. She emphatically reminds him that this action will leave her alone without her husband. They’re interrupted by Lieutenant DeVito, who is investigating Edith’s death. DeVito was actually a student of Henry’s in the sixties, and that while he did learn a lot, the officer isn’t really able to apply it to police work. Henry sees an opportunity to give himself up, but acquiesces to Polly’s wishes and simply says that he didn’t like Edith Wilshire – which turns out to be a popular opinion. Just as he’s leaving, DeVito asks if either of them have an idea where Edith’s phi beta kappa key could be – it wasn’t on her body or anywhere else.

Thinking that it must be in their house, Henry and Polly search frantically after DeVito leaves. Melvin turns back up and surprises them, brandishing the key and telling them that he actually had been at Edith’s cabin the night they brought her body up to the cliff, and that he found the key on the floor of her car after Henry had gone. He blackmails them, telling them that he’ll go to the police with all the information that wasn’t in the papers unless Henry changes his grade. Henry can’t make the call because the office has been closed for Edith’s funeral, and so Melvin tells them he’ll come back that afternoon, leaving them with no choice as to what to do next.

When Melvin returns, Polly offers him drugged tea, and once he passes out, Henry again grabs his bust of Socrates. But before he can do the job, the doorbell rings, and they tie Melvin up in the pantry. Polly finds Lieutenant DeVito at their door, asking questions about Melvin McMullen and telling her that Melvin might know something about Edith’s death, now considered a murder. While they talk, Melvin starts to wake up, and Henry struggles to keep him quiet until DeVito leaves. Running out of time, Henry raises the bust to kill him…but can’t do it. Instead Polly unties Melvin, who quickly flees, leaving the two of them to listen to some Mozart while waiting for the police. 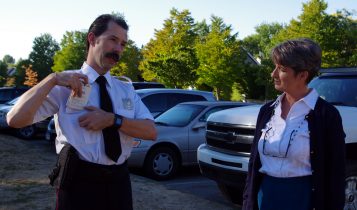 Hours later, Polly awakes from a nap to find that no one has come to arrest them yet. DeVito arrives, asking if they’ve seen Melvin. The young man had been brought in for questioning, told the police the tale of what happened at the cabin, and that they’d found Edith’s key on him. DeVito admits that Melvin escaped and is now on the run, and that Melvin stole his gun in the process. Unable to wait any longer, Henry confesses to killing Edith, and Polly insists on also being arrested as an accomplice. DeVito refuses, puts them under house arrest, and leaves to discuss it with his captain.

Melvin, dishevelled and unhinged, sneaks into the house and surprises Henry and Polly. Holding DeVito’s gun on them, he lays out the tale of what really happened. Edith hadn’t actually been dead, but merely unconscious when Henry pushed her off the cliff, and that in the dark, he couldn’t see that she’d only fallen three feet down instead of three hundred. Melvin found her climbing back up to the surface, and used the opportunity to try and get her to change his grade. When she laughed and refused, Melvin then pushed her down the cliff, this time making sure that Edith was, in fact, dead. As he’s telling this and threatening to kill the Lowenthals, DeVito sneaks up behind him and bashes Melvin in the head with the bust of Socrates, knocking him out and then explaining that he’d faked leaving because he thought that perhaps Melvin had been already been in the house to threaten them. He takes Melvin away, leaving them to wrestle with the idea that Henry hadn’t murdered anybody after all.

MEET the DIRECTOR for CLIFFHANGER 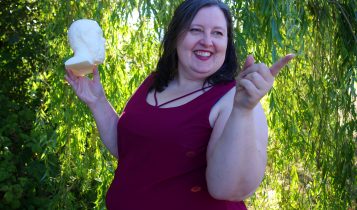 Kayt is a director, actor and writer who has returned to Metro to direct our season opener – Cliffhanger – opening September 15th.

Join Kayt and the cast of CLIFFHANGER immediately after the show on Friday, September 21st, 2018  for an informal chat.

Kayt will do a brief explanation of what interested her about the play,

Bring the cast in to talk about how they developed their characters,

And then open it up to questions from the audience.

There is no additional charge for the Director’s Talk, just stay in your seats or move up a bit closer to the stage. The session will last approximately 20 minutes.

Metro Theatre is proud to present our 56th Season opener CLiFFHANGER written by James Yaffe and directed by Kayt Roth, on our stage  September 15 – October 6.

Should ethics be based on the ideals of Socrates or on the real situation one faces? This is the question posed in CLiFFHANGER.

Henry Lowenthal, longtime professor of philosophy, is looking forward to his appointment to an endowed chair.  But their plans are destroyed when Henry’s department head, a vindictive former student, refuses to recommend him for the position – an act of such calculated cruelty that the usually gentle professor grabs a bust of Socrates and strikes her with it. 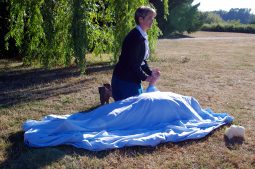 What now? Should he do the right thing (as he has preached to his students over the years)? Or should he follow the advice of his more pragmatic wife and dispose of the body?  How should he handle the young student who is blackmailing him to get a passing grade?  And what is to be done about the suspicious police detective asking questions about the body of a woman found at the bottom of a cliff?

Director Kayt Roth commented that  “When Socrates said that, “The only true wisdom is in knowing you know nothing”, he must have had Henry Lowenthal in mind.  The philosophy professor’s world gets turned upside down, forcing him to question just what sort of man he really is.” Suspenseful, funny and full of unexpected twists, CLiFFHANGER will have you on the edge of your seat as Henry tries to disentangle himself from his web of deceit! 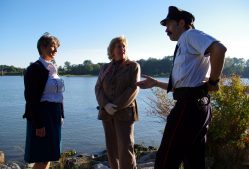 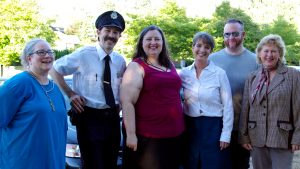 Metro Theatre is a non-profit theatre company, dedicated to promoting and developing theatre arts.  This is our 56th continuous season of bringing laughter, intrigue and surprise to live audiences. CLiFFHANGER is our 511th  show.

Performances are Thursday to Saturday at 8:00 pm, with Sunday Matinees at 2:00 pm.

The Director’s Talk is September 21st

The preview is on Friday, September 14th, the final dress rehearsal.

Tickets are $25 for adults or $22 for seniors and students, with a special every Thursday 2 for $37. Preview performance $15.