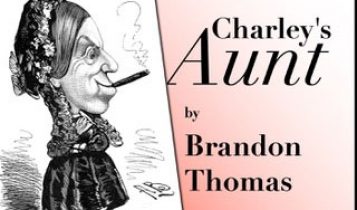 Oxford, 1882. Two students, Charley Wyckham and Jack Chesney, want to have lunch with their girlriends. Old Stephen Spettigue–an uncle to one of them, a guardian to both–won’t let them anywhere near the boys; but he’s going out of town. Still, the proper young ladies won’t visit the young men without a chaperon. Charley’s aunt from Brazil–where the nuts come from–is expected to arrive. When she doesn’t, the boys have to do some quick thinking. Enter their rascally friend and fellow student Babbs Babberley, trying on an old ladies costume for the varsity play. They pretty much blackmail him into posing as Charley’s aunt. This ruse sets in motion a series of events that includes Babbs getting courted by both Spettigue and Jack’s father, Sir Chesney. And then Charley’s real aunt shows up.

Lord Fancourt-Babberley-also a young undergraduate. Jolly and cheerful. Doesn’t seem to worry about studying-more interested in having a good time.

Stephen Spettigue-50-60. Well-to-do solicitor. Pompous and opinionated. Guardian to both the girls.

Brassett– 50-60. Manservant to Jack and Charley. Polite and helpful while shaking his head at the young men’s antics.

Kitty Verdun-20s. Heiress. Practical and down-to-earth. In love with Jack.

Ela Delahay-17-20. Ward of Donna Lucia. Unaffected, with a good sense of humour and high spirits.

Donna Lucia D’Alvadorez-40-50. Englishwoman whose financial genius led her to marry a wealthy Brazilian.Very kind-hearted and with a good sense of humour.

Rehearsal period:   3 times per week February through until opening night

Requirements: Auditions will be cold readings from the script; the director will choose which scenes the group will read.

Upper class English accents required for everyone, except Brassett but coaching will be part of the rehearsal process.

PRINT out the  Charleys Aunt_Fillable Audition Form and bring it and your headshot with you to the audition.

• You can SUBMIT your interest using the show’s contact form  OR PRINT out the Fillable Audition Form and bring it and your headshot with you to the audition.